On International Day of Families, what world leader supports families more than Pope Francis? From giving advice to couples to embracing the smallest of children, here are some of his best messages to families.

PLAY TOGETHER
POPE FRANCIS
May 7, 2018 “I have a habit. When I hear the confessions of a father, a mother who has young children, also older, but above all younger... I ask them if they play with their children. Values are also transmitted through playing. But do you have time to get on the floor and play with your son, your daughter? This is big. Never lose this. Know how to spend time with your children. This language of love is able to transmit all the values of the faith.”

MARRIAGE CATECHUMENATE
However, not all is fun and games with Pope Francis. When he spoke to the Roman Rota in January 2018, he also emphasized the importance of marriage preparation, and renewed his call for a “marriage catechumenate.” He wants couples to solidly form their consciences and also foster a Church atmosphere that supports marriages in difficulty.

POPE FRANCIS
January 29, 2018 "We must ensure that the conscience of the faithful in difficulty, as regards their marriage, does not close up the path of grace. This aim is achieved through pastoral accompaniment, and the discernment of consciences."

THE WAR AGAINST MARRIAGE
This preparation and continual support by the Church is key because of the many threats facing marriage today.

PRAY FOR PARENTS
Despite the difficulties, the pope offers hope. In April 2018, Pope Francis comforted a boy whose dad had died and asked if his non-believing father could still be in heaven. He also set an example by telling the young child to pray for his dad, as a reminder for everyone to pray for their parents, whether they are dead or alive.

POPE FRANCIS
April 16, 2018 “Do you think that God would be able to leave a man like him far from Him? Do you think that? FLASH God surely was proud of your father, because it is easier when one is a believer to baptize his children, than to baptize them when you are an unbeliever. Surely God like this so much. Talk to your dad, pray for your dad. Thanks Emanuele for your courage."

FIDELITY
Courage, he has noted, is needed today for couples to get married and remain faithful to each other. Pope Francis has called out those who are afraid that marriage will restrict and destroy their freedom.

POPE FRANCIS
October 21, 2015
"Currently, some factors like the search for personal satisfaction at all costs, or the non-negotiable exaltation of liberty, have weakened this promise. Faithfulness is dishonored through broken promises, or when spouses take the word with leniency.”

CARING FOR FAMILY
The pope has also explained that being faithful to one's spouse allows beauty to flourish and makes the bond of marriage even more powerful. It not only strengthens the family, but society as a whole.

POPE FRANCIS
October 21, 2015
"Faithfulness also includes caring and educating one's children. It means caring for the elderly in our families. It means protecting and helping the most fragile members of our family. Helping one another by enhancing our strengths and accepting our weaknesses."

Thus, through the courage to get married, playing games with your children and caring for the elders, families can be strengthened and uplifted in society.

It's an easy way to combat the negativity constantly being thrown around and focus on what is most important. 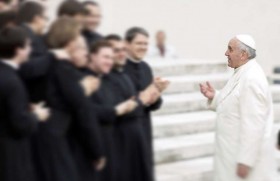